In the Jewish quarter in Berlin one might encounter an impressive looking abandoned house. The entry is completely closed and only a small sign on the wall next to its entrance tells the story of what this building used to be and what it meant to the Jewish kids that found sanctuary in it. During a very turbulent time in Berlin’s history.

The house in the Auguststarße 14-16 was built in 1861 as a Jewish hospital and was operating as such until 1914 when the hospital was moved to a larger building elsewhere. In 1914 the building was reopened as a soup kitchen for the poor members of the Jewish community of Berlin. After the First World War, there was a growing rate of Jews arriving to Berlin from Eastern Europe escaping the pogroms. Many of them were poor and some kids also arrived without their parents. And so in 1918 the house became a Jewish orphanage where these kids could find refuge and receive an education.

In 1922 the management of the orphanage was given to a nurse by the name Beate Berger. In 1933 with the Nazi rise to power, Beate decided to move the orphanage to then mandatory Palestine, knowing that Germany was no longer a safe place for Jewish children.  In 1934 the first group of kids was already transported to its new home near the city of Haifa.

The British mandatory administration did not allow the transfer of all of the kids that were living in the home but nevertheless Beate was able to transfer about 300 kids to safety in Palestine until 1941, when leaving Germany became illegal for Jews and the first transports to the concentration camps left Berlin. 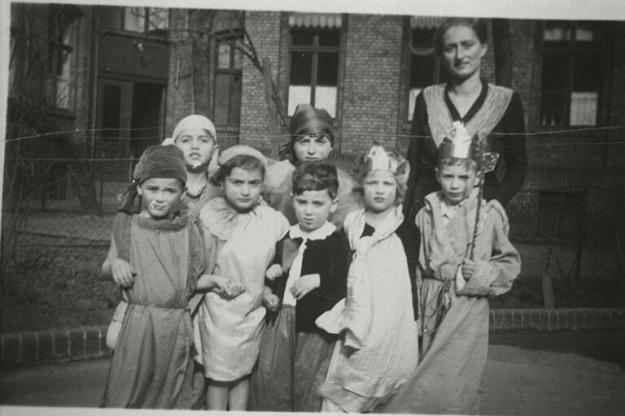 Beate passed away in 1940 and was buried in the Mount of Olives in Jerusalem. In 1941 the house was confiscated by the Gestapo and turned into an internment camp for Berlins Jews. The kids that were staying there at the time were all sent to the concentration camps in Eastern Europe.

After 1945 the building was not returned to the Jewish community and was used as a local boarding school.

In 2007, a documentary film (German/Hebrew) by the name of “The house on Auguststraße” was released telling the story of the house. The movie was directed by Ayelet Bargur whos grandpas sister was beate Berger herself.

The house now stands abandoned with its windows boarded shut with no known plans for renovation. You can find it in the Jewish quarter of Berlin (Auguststarße 14-16 ) and it is also a stop on the Jewish heritage tour of Berlin.

Feel free to contact me for any information you might need. Make sure to state your specific interests and where you would be staying so that we could tailor a tour that fits your needs. 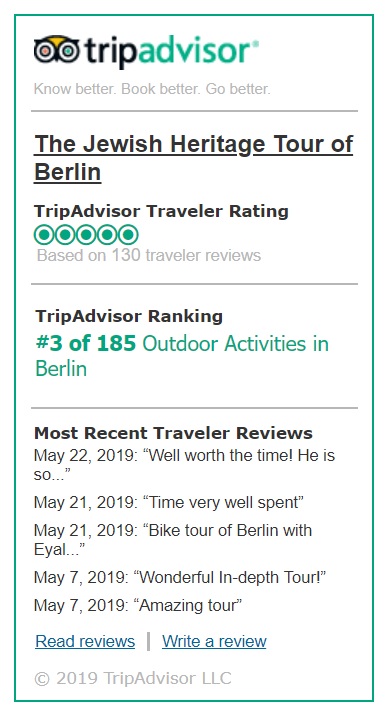 What people say about the tour.

I just wanted to say thanks so much for giving us such a fascinating day when you guided us last week. Your knowledge was incredible and the 'narrative' of the day made for a very powerful experience.

As you said, it's difficult to conduct a tour around a world that has vanished, but your eloquence truly helped to bring the past to life.

Thank you for being a terrific guide during our trip to Berlin recently. We came from Australia having never travelled to Berlin. You gave us an excellent and informative walking tour of “Jewish Berlin” incorporating history through the generations . In doing this we learnt so much about jewish history and places of interest, with reference to WW2 and well before. In addition to this, your knowledge of the museums and places of general interest of a more general kind was incredible, and we appreciated how much time and effort you put into answering our questions, and offering us information. We felt that you were honest, reliable and interesting to listen to and would definitely contact you in the future and send people traveling to Berlin too you.

Berlin is layered, rich in nuances and history. To really understand it, you need an expert guide that will take you beyond and explore the city’s possibilities. For my husband and I that was Eyal. We did 2 walking tours; one of Jewish Berlin and one an overview of the city. He was able to give us the context and history that allowed us to appreciate Berlin. He is knowledgeable and approachable and we highly recommend him.
Dr. Beverley Freedman

Thanks a ton for the tour. While people say, it is two Israelis, three opinions…well, we had four Israelis and one opinion…that you were great.